The Republic of Guinea possesses one of the world’s largest reserves of bauxite, the raw material used for the production of aluminium. The ‘Compagnie des Bauxites de Guinée’, CBG, is engaged in developing and exploiting the local bauxite reserves located in the North West of Guinea.

Kamsar is a small mining village located about 200 km north of Conakry, the capital of the Republic of Guinea. The Port of Kamsar is situated inside the Rio Nuñez estuary and comprises 3 quays: the ‘Mineral Quay’, used to export the bauxite, the ‘Italian Quay’, used as a working quay for tug boats and smaller vessels, and the ‘French Quay’, used as the main import facility for supplies to the mine and township.

The old structure of the ‘French Quay’ was built in the late 1950’s as a cellular cofferdam structure using straight web steel sheet piles. The upper part of the structure consisted of a concrete capping beam. The site has undergone further development over the years including a concrete beam founded on large diameter cast in situ concrete piles and the placing of fill material behind the original structure allowing a larger area for port operations and cargo handling. Two vessels arrive at the ‘French Quay’ every month.

Early in the 21th Century, CBG decided to extend the service life of their facility. As could be expected after such a long period of use, the structure needed to be rehabilitated. The most cost-effective solution that matched all the design criteria and construction constraints was the installation of a new sheet pile wall in front of the existing diaphragm cells.

A 116 m long quay wall made of AZ 40-700 sheet piles was installed in front of the existing quay, connected by 50 mm tie-rods to an anchor wall created with AZ 36-700 sheet piles. 16 temporary fenders, made of CU 32 box piles, were driven to protect against the deterioration of the new quay wall elements from mooring vessels.

The sheet piles were driven with a PVE 50M vibratory hammer. Due to very compact soil conditions in certain spots, some sheet piles had to be driven with a 9 tonne hydraulic impact hammer BSP 357. A two-level template fixed to the existing quay was used to ensure the plumbness of the sheets during installation.

In the western extremity of the quay a semi-circular wall with a radius of 8.4 m had to be driven under the existing derrick crane. To allow the installation under the derrick beams, field splicing of the sheet piles became necessary. The sheet piles were supplied in different lengths in order to avoid the splice to be located at the same elevation.

The gap between the new and the existing wall was backfilled with granular material and a new backfilled area was created over the tie-rods and anchor wall. A concrete capping beam was installed on top of the new sheet pile wall and the port operation area was paved with a concrete slab. Owing to the extreme tidal range of around 5 meters (from +0.2 to +5.8), and the corrosion rates prevailing in the area, the new capping beam is 4.5 metres high, covering almost the whole exposed sheet pile wall, and protects the splash zone. For the immerged portion of the sheet pile wall, a cathodic protection with sacrificial anodes was installed.

Furthermore, 14 CU 32 box piles acting as fender elements were driven in front of the quay wall and connected to it. Conventional rubber fenders were fixed on the CU box piles.

A critical requirement imposed by the project owner was the construction time-frame. The contractor started work towards the end of 2006 and the new structure was ready for use by the end of December 2007.

Steel sheet piles were selected for the rehabilitation of the quay wall because of their good structural performance, their short construction time, their cost-efficiency, and last but not least, because of environmental aspects (AZ sheet piles are manufactured from recycled steel and thus have low impact on the environment). 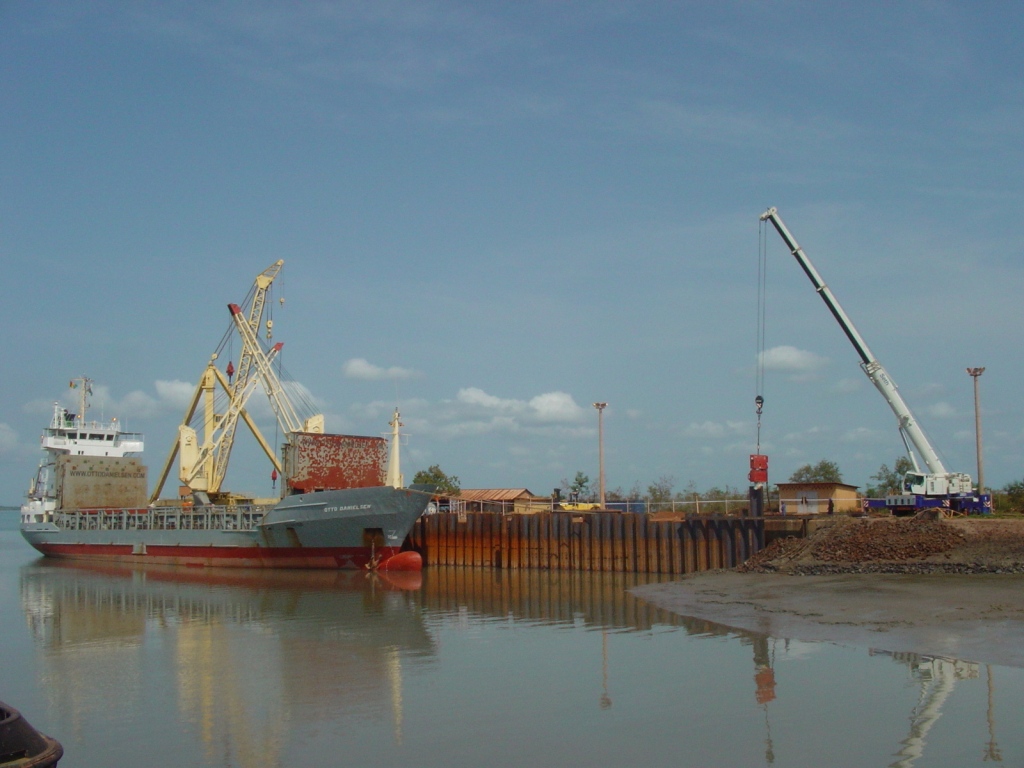 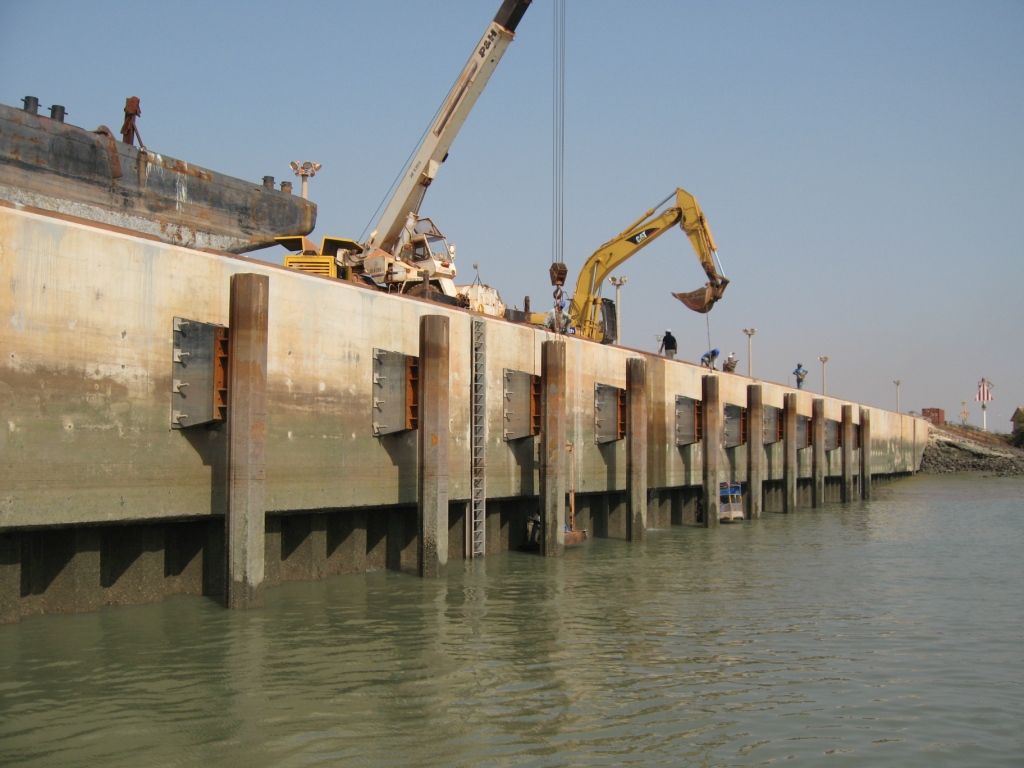 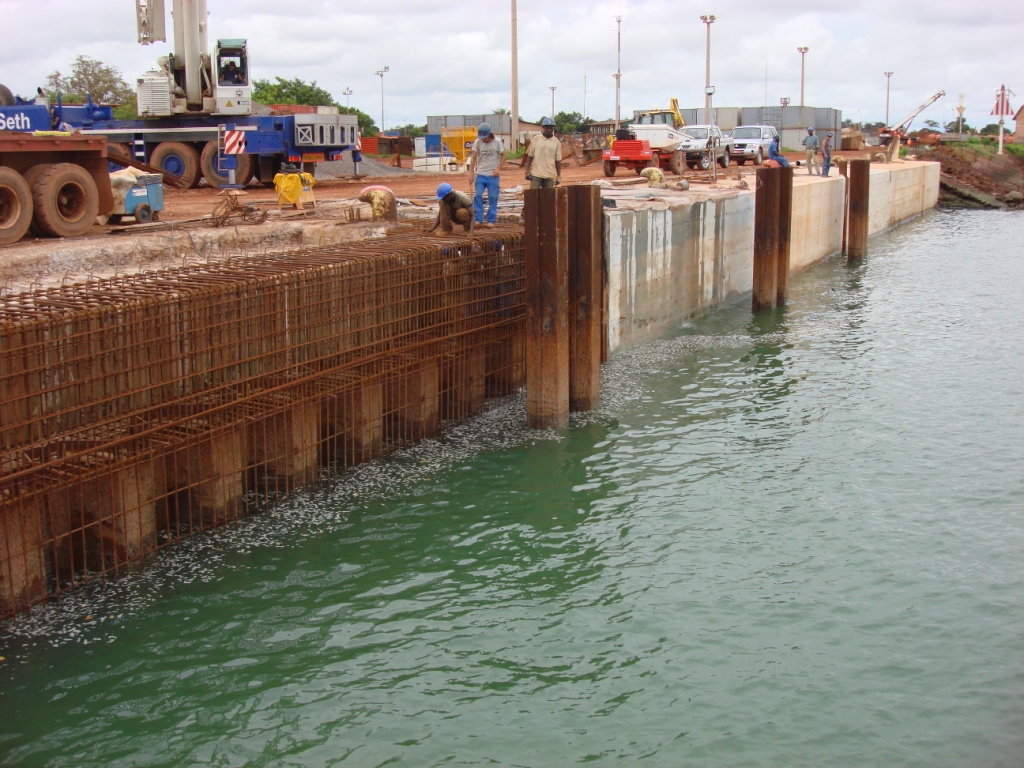