Due to high energy prices, the world is currently experiencing a run on alternative energies. Germany boasts the planet's largest number of wind farms totalling an annual energy production of 20 000 MW in 2007. Further investments to expand the offshore wind farms in the North Sea are foreseen.

The portal town of Cuxhaven is ideally located on the estuary of the Elbe River to serve as on-shore base for the construction of wind turbines and their foundation elements. The federal state of Lower Saxony has set itself an ambitious target: increase the relative share of renewable energy to 25% by 2020. Some 48 million € are therefore invested into different projects related to wind power in Cuxhaven. Shipment of the first foundation elements for the wind turbines is foreseen in March 2009. Construction time of the launching port had to be as short as possible, in order to stick to the tight schedule. The decision fell in favour of a steel sheet pile alternative with a construction time of merely eight months.

Numerous terminals at CuxPort are currently expanded. A production area for the assembly of the turbine's 117 m high steel towers is currently being built. In February 2008, the government of Lower Saxony approved the construction of Berth 8 in the old "Grodener Hafen" including a production yard for the steel foundation elements that assure the stability of the wind turbines. The company CSC is specialised in the construction of offshore foundations including the so-called "tripods" that hold the modern 5 MW class wind turbines securely in place throughout the heaviest storms. The production site will be placed on sheet pile retained elevated ground. Some 630 000 m3 of sand will be dredged from the Elbe River and heaped up to an elevation of +6.5 m.

Berth 8 will comprise a 160 m mooring spot parallel to the navigation channel, a 115 m waiting area for the transport ships, and a 116 m long loading area built perpendicular to the navigation channel behind the waiting area. A water depth of 9.5 m is projected for the three mooring spots at Berth 8. The existing soil conditions had to be analysed at the start of the project. The top soil consist of 4 m thick clayey silt with poor bearing capacity overlying two sand layers interrupted by clayey peat at -15 to -20 m. Sand was placed over the inclined top soil to create a horizontal planum.

PU 22 sheet piles were installed as temporary soil retaining wall enabling land-based installation of the heavy steel piles forming the harbour walls. A vibratory hammer based on a jack-up barge was used to drive the 18 m long PU 22 sheet piles a couple of metres off the location of the permanent wall. The future loading area, furthest away from the estuary, was entirely sealed off by the temporary sheet pile wall and then backfilled. Sand was also placed behind the temporary sheet piles installed in front of the planned waiting and mooring areas. Sand was piled up with ships and lorries to EL. +2.5 m. A stone-secured embankment permitted the reduction of soil pressure on the temporary cantilever PU 22 sheet pile wall. A vertical drainage system was installed to increase the bearing capacity of the soil, thus reducing the risks of later settlements. The PU 22 sheet piles were delivered on a rental basis from ArcelorMittal's nearby stock in Nordenham, off Bremerhaven.

The permanent berth wall consists of up to 35 m long tubular piles with a diameter of 1 420 mm and a thickness of 16 mm in steel grade API X65. C9 connectors were welded to the king piles to relate them to the intermediary sheet piles. The upper metres of the sea-facing side were provided with a protective coating. The tubular piles came from ArcelorMittal's spiral welding tube mill in Dintelmond, Holland and were shipped to Cuxhaven. An internal ring (30/200) at the bottom of the tubular piles strengthens the toe of the pile and increases their bearing capacity.

Verticality and correct inter-distance (3.02 m) were guaranteed thanks to a single level template and by controlling the inclination of the rigid adjustable boom of the Liebherr crane. A Müller MS-100 HHF vibratory hammer was used to drive the first 25 m of the tubular piles in less than one hour. The pile was then lowered to design elevation (-25 to -30 m) with an IHC S90 hydraulic impact hammer. The king piles had to be driven at least 5 m into the lower sand layer.

ArcelorMittal's new extra-large AZ 14-770-10/10 were installed next into the gaps between the king piles. The double AZ piles were first driven to a depth of -15 to -20 m with a vibratory hammer, then with a hydraulic impact hammer to final depth. The intermediary piles were delivered in steel grade S 390 GP from the ArcelorMittal mill in Belval, Luxembourg.

Once the tubular combined wall was installed, a jack-up barge was used to drive the battered anchor piles for the waiting area and the mooring spot on the Elbe River. As the future loading area was entirely backfilled, the equipment to drive the HTM anchor piles for this part of the project was set up on land. The HTM 600 piles have a length ranging from 45 to 65 m. They were driven with a hydraulic impact hammer (IHC S70) fixed to an inclined leader at an angle of 1:1.2 into the lower sand layer. The battered HTM piles were fixed to the tubular king piles of the combined sheet pile wall. 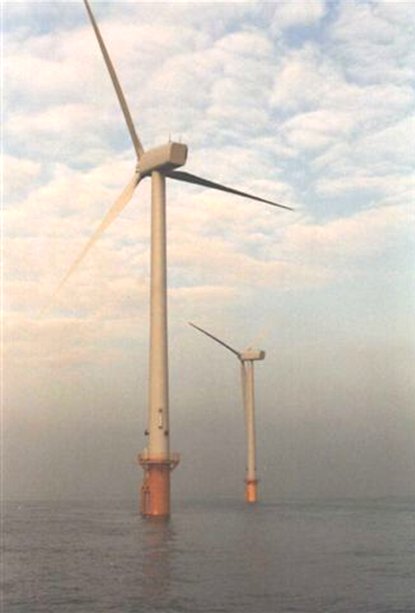 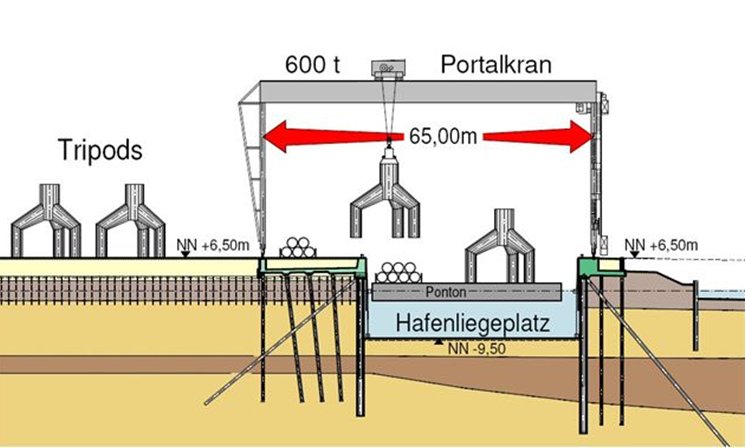 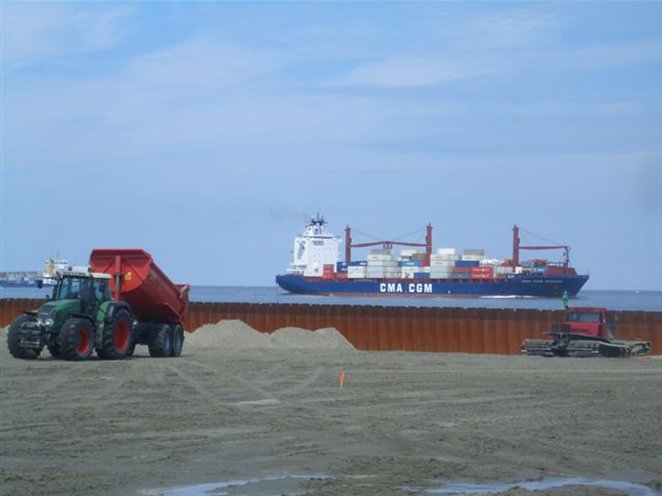 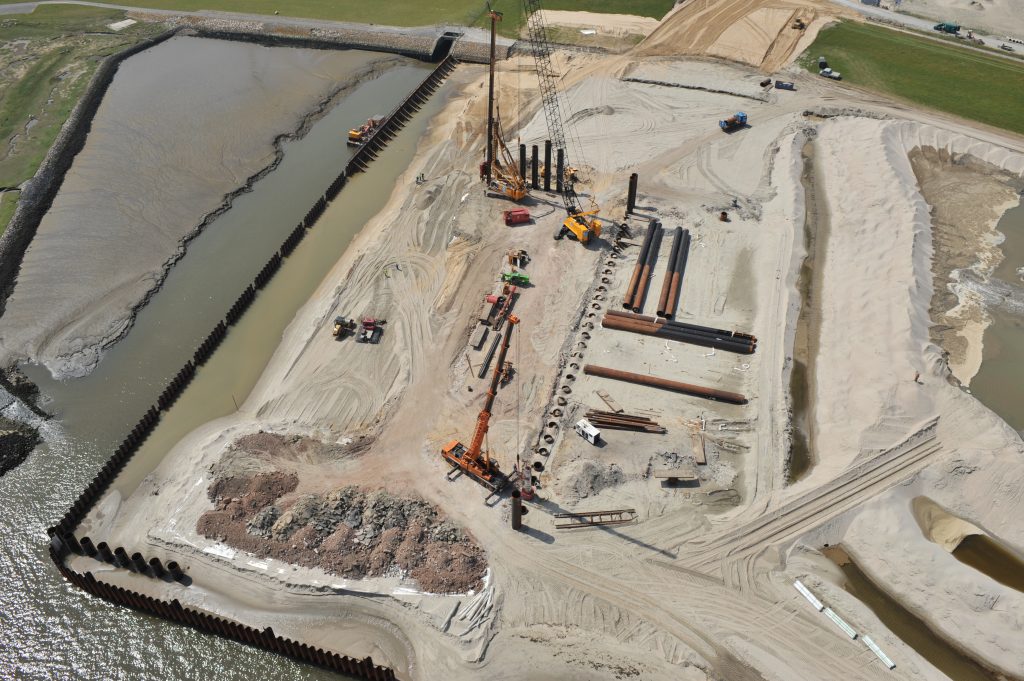 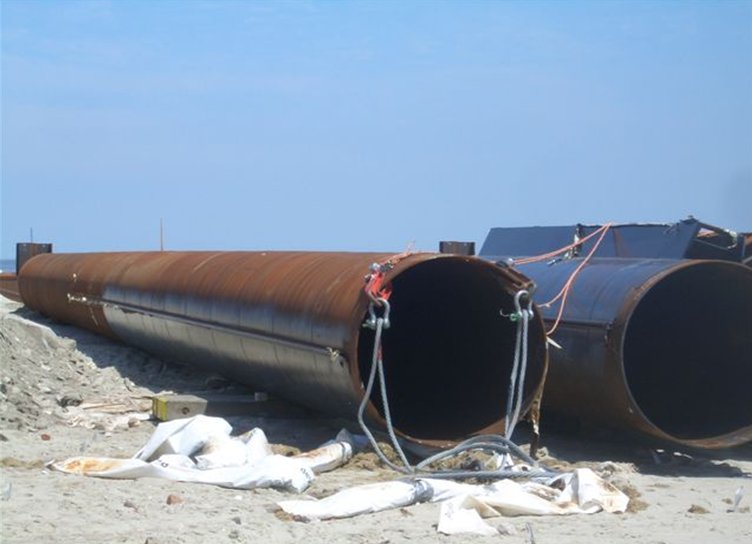 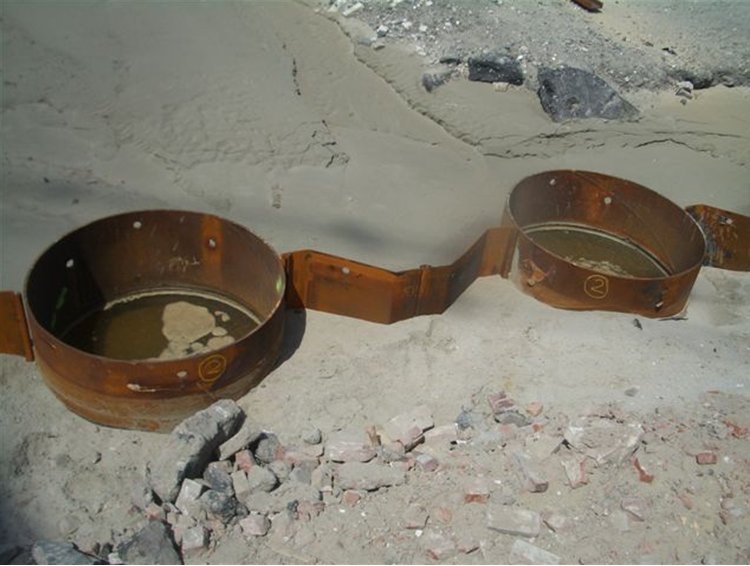 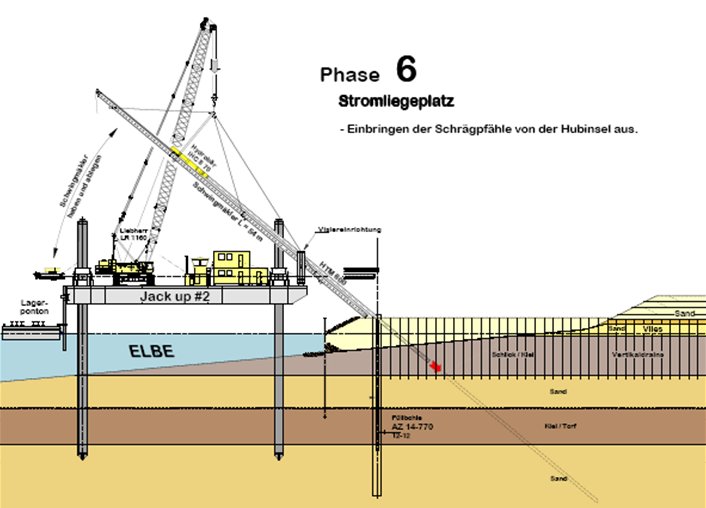 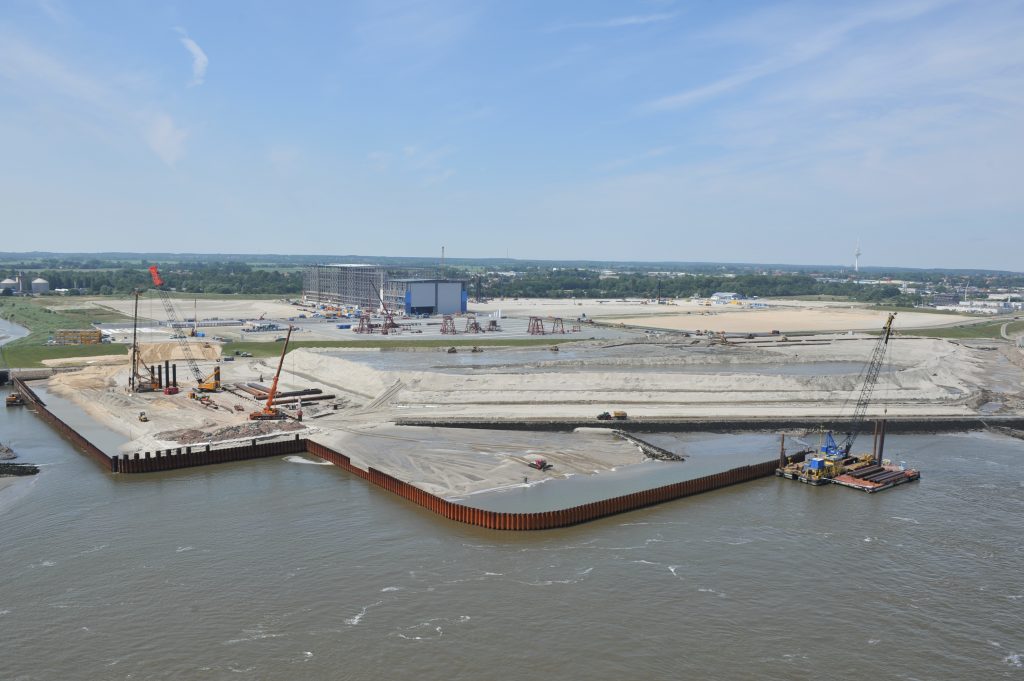