The city of Sevastopol is situated on the Crimean Peninsula in the Black sea. A former home base for the Soviet black sea fleet, Sevastopol’s economic backbone has nowadays shifted from the military aspect towards tourism, trade and shipbuilding.

A terminal operated by a local steel slab exporting business with a water depth of 8 to 10 m was too shallow for modern vessels. The problem was further amplified by ongoing silting up of the harbour bed. The water depth was due to be increased to 17.5 m to allow mooring of larger vessels. ArcelorMittal’s in-house design team therefore elaborated a feasibility study and a preliminary design for a quay deepening solution that foresaw the installation of a combined sheet pile wall in front of the current deck on pile structure. As the existing structure was in good shape, it was decided to incorporate the new steel wall into the deck of deck on pile structure. Anchors and anchor wall were thus not necessary, which lead to a particularly economical structural upgrading despite the heavy surcharges from the storage area of the steel slabs.

The lifetime of the structure was set to 50 years. The loss of steel thickness due to corrosion was based on EC 3-5 tables. The designers opted for high yield strength steel in order to reduce overall weight and costs. Due to the heavy surcharges and important water depth, the resulting maximum deflection amounts to 115 mm and the moment reaches 1 580 kNm/m at the end of the given life time of the quay structure. The chosen sheet pile wall consists of two elements: 34.50 m HZ king piles and 14.5 m AZ intermediary piles. King piles are the main structural elements that carry the vertical and horizontal forces of the structure. The head of the king piles was incorporated into the platform of the deck on pile structure.

They are fitted with connectors into which the intermediary sheet piles are threaded to form a continuous wall. The intermediary sheet piles merely retain the inclined slope below the deck on pile, wherefore they have a reduced length and are made of lower strength steel. The combined wall has an initial section modulus of 6 655 cm3/m. A reduced section modulus of 5 715 cm3/m following a 50-year lifetime of the structure was considered for the design.

The main wall has a length of 235.5 m and consists of 132 king piles and 131 intermediary piles. Sheet pile solutions are characterised by their great flexibility: piles in staggered lengths were used for the shallower parts of the main wall and the return walls. 1 840 t of sheet piles were produced in Luxembourg and delivered by vessel to Sevastopol via the Belgian seaport of Antwerp

The king piles were driven first with the help of a template. The intermediary sheet piles were then fitted into the connectors of the king piles and driven under water to design elevation. On-site available steel frame boxes were equipped with guiding devices fitting the king piles and assembled into a driving template (3 boxes high by 6 boxes wide) to install the king piles. The quay’s rail mounted crane was used to move the template into position and to handle the installation equipment. The template was placed onto the terminal’s capping beam and on beams placed on piles driven into the harbour bed. The king piles were first driven until refusal with a vibratory hammer, then with a hydraulic freefall hammer through 2 m of limestone to design depth without major problems. The king piles broke the limestone which eased the installation of the weaker intermediary sheet piles that completed the new quay wall.

The harbour bed was dredged to EL. -17.5 m once all the piles were installed and incorporated into the deck on pile structure. 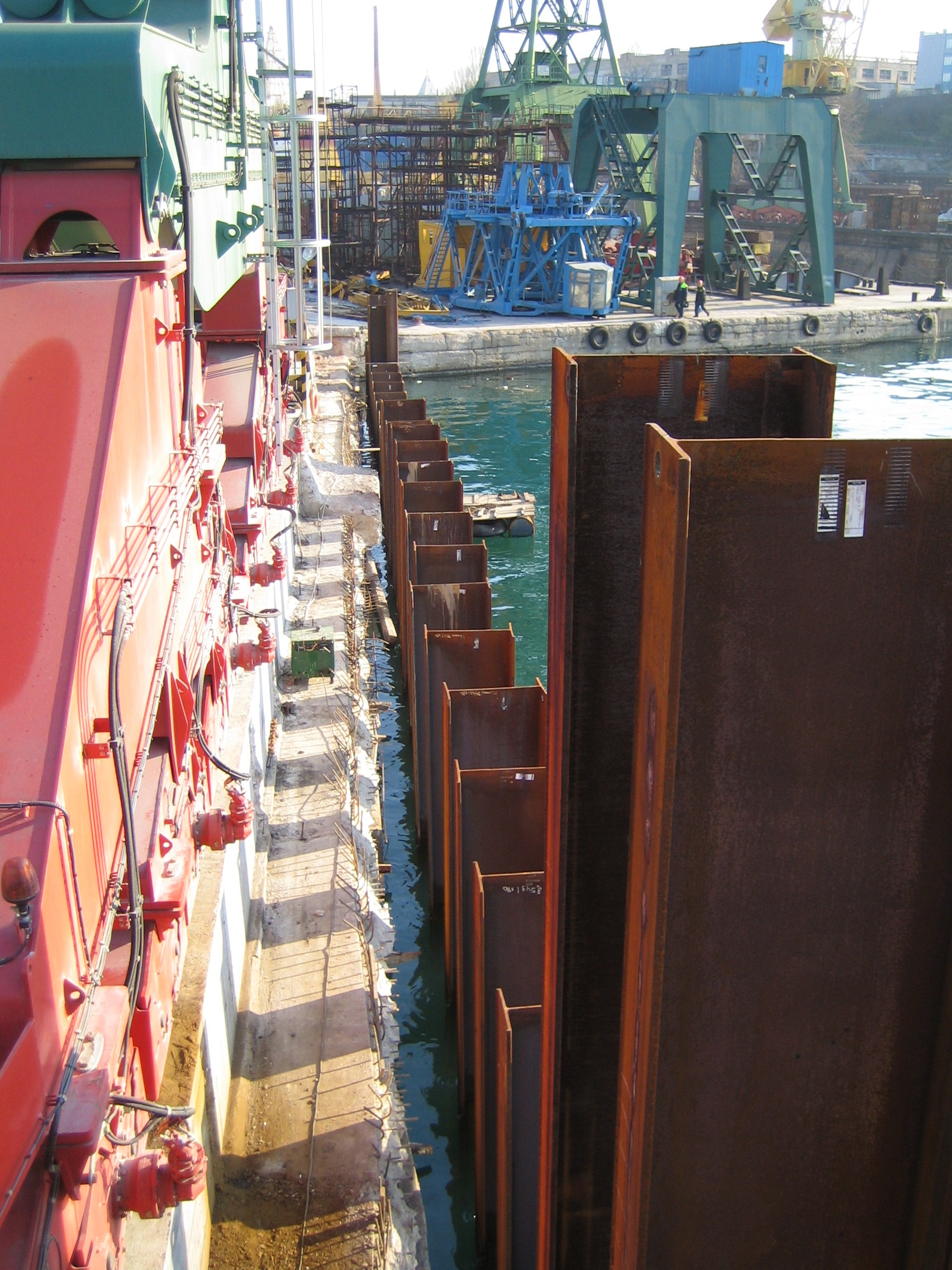 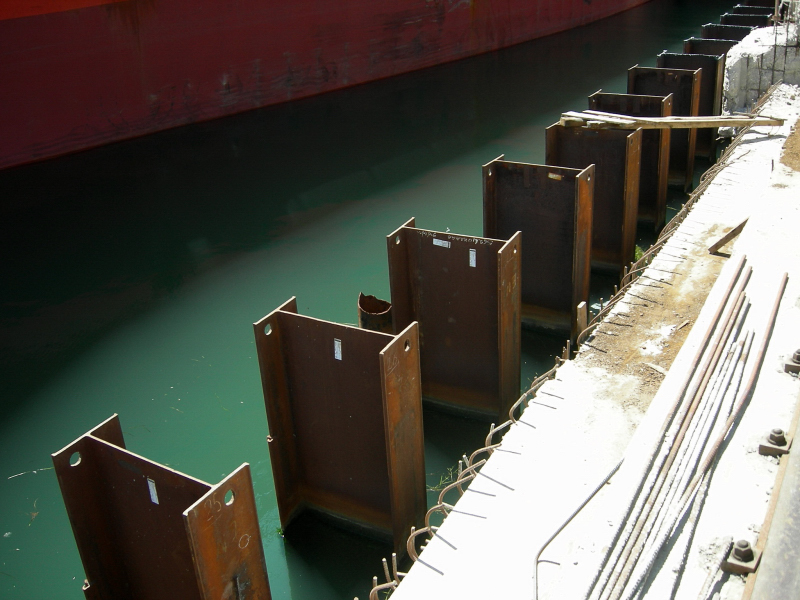