Deptford Creek is a tributary of the Thames in London inside the Thames Barrier. In order to protect an estimated 33 000 households from flooding, the Environment Agency identified five Wharves along Deptford Creek for immediate replacement. Existing anchored timber pile structures were assessed to be reaching a stage where failure was imminent. The five identified locations were Kent Wharf, Ash’s Wharf, Thanet Wharf, Hilton’s Wharf and Saxon Wharf.

At the highest frontage the 109 m long Hilton’s Wharf has a retained face of 7 m. Future development plans for the site precluded the use of permanent anchors to support the new wall and so an innovative solution facilitating a composite wall system (propped structure) was engineered by Jacobs / Volker Stevin.

The new wall was to have a 100 year design life and was to embrace the objectives of the Biodiversity Action Plan. The solution consists of a steel sheet pile wall made of around 1 040 tonnes of AZ 41-700 in grade S 430 GP steel grade, and in 16.5 m up to 17.5 m lengths. These are supported by a row of 12 m long 305x223 HP bearing piles driven at a 10 degree rake in front of the sheet pile wall, with timber planking spanning between each HP pile. A mass concrete block was then poured between the sheet piles and HP piles lines down to the excavated depth, exposing the gravel layer, such that the structure acted in unison. The top of the concrete block level was Mean High Water Neap (MHWN) level such that the planting area above could offer maximised value of environmental habitat.

The construction of this innovative “composite cantilever” sheet pile wall presented its own challenges in that the working space was limited to only 10 m behind the existing old walls which were in such poor state that they could not support construction surcharges. Besides, in some places the existing wall could not be subjected to vibration from conventional installation techniques. To accommodate these requirements the AZ&nbsp;41-700 sheet piles were installed behind the existing structure by an ABI Vibrator MRZV-V (variable frequency) on a leader rig, or where vibration was to be minimised, the subcontractor Stent / Giken used the Giken Crush Piler ECO 700S with a press force of around 100 tonnes. This pressing equipment incorporates an auger to bore ahead of the pile toe before the press pushes the piles down in combination with water-jetting.

The sheet piles were then tied back to a temporary deadman (concrete block). A specialist bridging mat was then installed, spanning from the deadman to the sheet piles and avoiding any surcharge on the ground behind the main wall. From this mat the excavator could remove the old timber structure and dig down to expose the gravel layer. Additionally, the HP raker piles could also be installed from the bridging mat. After fitting the timber planking between the HP piles mass concrete was poured between the walls which when cured bound the wall and the supporting HP pile wall into a kind of “A frame” composite structure.

The deflections measured during the temporary stage were lower than predicted in the design calculations. The criteria for deflection during the final phase is 200 mm at ULS with a surcharge load of 20 kPa behind the wall. A static reserve of steel thickness was taken into account in the design in order to achieve the design life. No surface treatment was implemented.

The condition of the existing walls, the site area restrictions, the requirement for a cantilever solution and duty of care to the Natural Habitat combined to pose quite a complex problem. Jacobs Engineering with early contractor involvement from Volker Stevin, adopted a combination of steel sheet piling and steel bearing piles to form a structure which elegantly met all technical and economic aspects of the project. 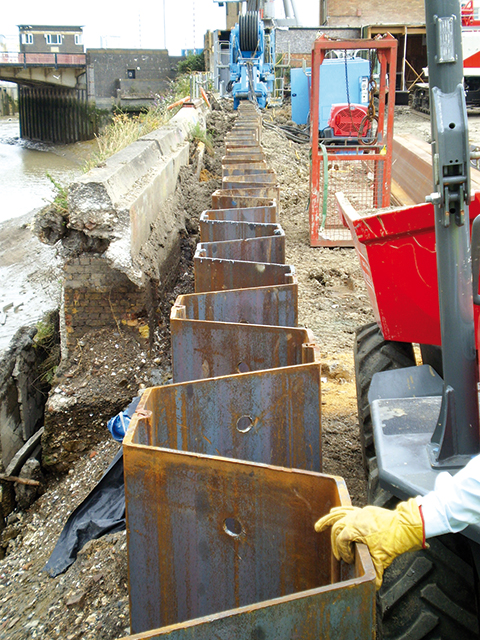 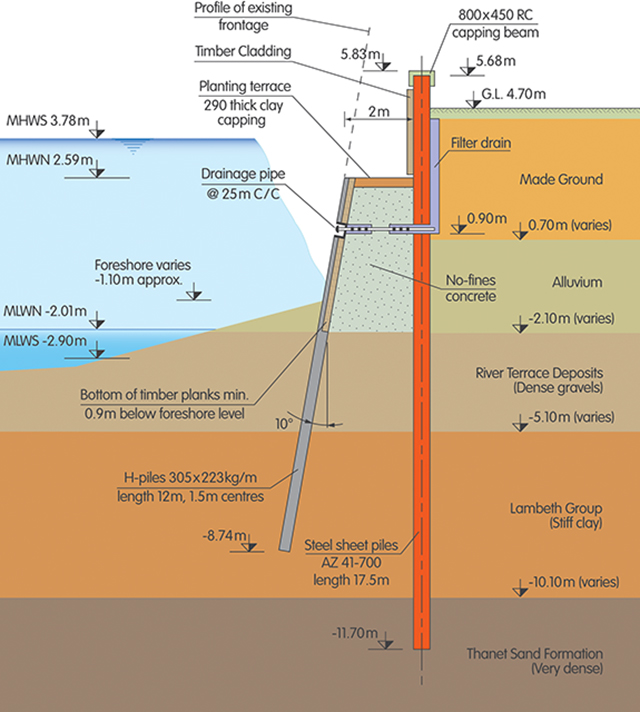 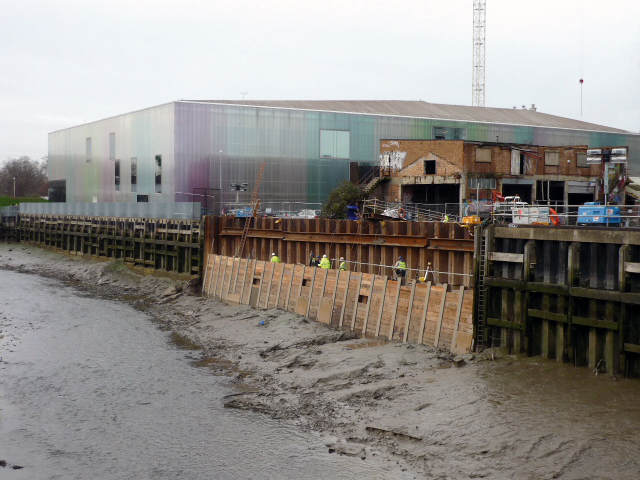